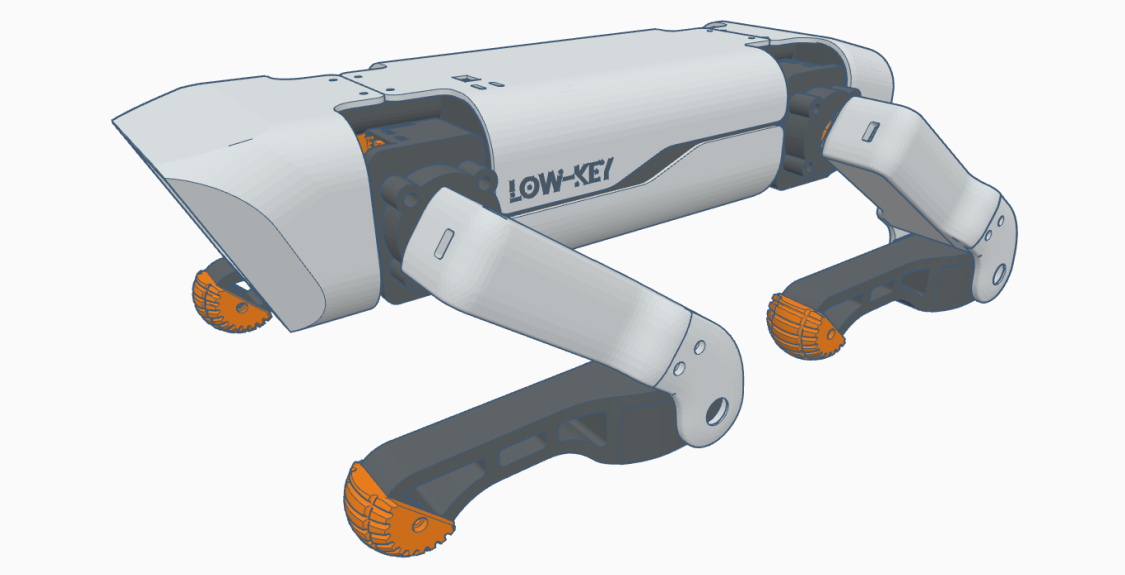 The project
Creating a Boston Dynamics Spot clone! Prior knowledge; Some experience with tracked robots. Good luck to me, i guess!

TL;DR
This is my version of the wonderful Spot from Boston Dynamics. Albeit a lot less advanced. With a lot less features. And a lot less high-tech stuff. Basically a dumbed down Spot-like quadruped with a similar appearance..

First things first!
It needed a name. I asked my daughter for help in naming this beast. She called in the help of her friends. All of them are fans of Marvel’s Loki (the mischievous Asgardian God), in one way or another. They settled on; Low-Key(because i low-key have no idea what im getting myself into?). Now my project can actually start!

So, uhm, now what?
Honestly, i just started to collect the hardware i found on lists of people that seemingly did know what they were doing. Currently my list of hardware consists of:

Now i just need to find a way to get all of the above into my quadruped and even make it work! I’m sure the list will get longer as i go.

Tools, machines and beverages
To get it all off my desk and into a working robot i need tools. Lots of tools. So lets start off with my 3D printer. I have a Creality Ender 3 V2. It’s mostly stock (even the firmware) except for the extruder which i upgraded to a metal one. So far, so good. A soldering station, multimeter, a bunch of hand tools and Heineken within reach. Should be good to go.

Prior experience and background
I have some experience with small tracked robots like the Pololu Zumo. And in 2010 i made an Ambilight clone using an Arduino Duemilanove, and a 3x3x3 LED cude.

Now for my background. Im a graphics designer, amateur photographer, robot enthusiast, interested in all things electric and a maker. Im probably going to change the STL files i found to fit my needs. To make it look better. Or to make it walk smoother.

This project is a bold one to take on with my level of experience. But im doing it nonetheless. Can i make it work? Let’s find out..